What is Acne Rosacea?

What is Acne Rosacea 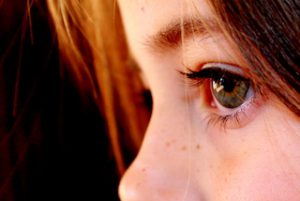 Acne Rosacea is a type of Rosacea that shows a permanent redness of the skin along with red pus filled bumps that resembles pimples, which is why this type is often mistaken for acne.

Rosacea is in fact a chronic skin disease that affects many people, the cause is unknown and there is no cure.

There are treatments that can help to reduce the symptoms and on some occasions the condition has been known to go into remission for long periods of time. 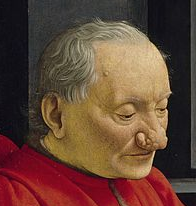 nose. Phymatous Rosacea signs are enlargement such as the nose, thickening of the skin and surface nodules. This type can also be seen on the forehead and chin.

Ocular Rosacea – this type affected the eyes and eyelids, the eyes may feel like you have sandpaper in them as well as be dry and irritated. Other symptoms of this type of Rosacea are itching, burning and being sensitive to the light. A person can get eye infections and blurry vision.

Erthematotelangiectatic Rosacea – this type leaves the person with a permanent redness of the face and can have blood vessels near the surface widen causing burning and itching. This type of Rosacea can also affect the ears, neck, chest, scalp and upper back. The skin is often sensitive, dry and flaky.

The fourth type will answer the question What is Acne Rosacea well it is also called Papulopustular Rosacea and shows as a permanent redness of the skin, but is often accompanied with red pus filled bumps, that is why this type is often mistaken for acne, so over the years it was called Acne Rosacea or Subtype 2 Rosacea.

There is no exact known cause for Rosacea although there are some triggers that are said to cause flare-ups. Some of these are:

Treatment will also depend on the severity and the type of Rosacea you have. Mild causes are usually not treated at all where as a bad breakout would be treated with medications, these medications could be orally or topically or both.

Keeping a journal and recording what you eat, what you have put on your skin, stressful events, and when you feel anxious etc. This is a good way to figure out what your triggers are.

Other things you can do to minimize your breakouts is to avoid the triggers that make this conditions worse. Some of recommendations would be:

Some people have benefited from wearing wide brimmed hats in the sun and others from wearing sunscreen, but be careful with the sunscreen, make sure it is a natural product and not something that will irritate you skin.

Rosacea does not affect everyone the same and it can take a long time to figure out what your triggers are and how to manage your condition. It is best to work with your doctor and between the two of you develop a treatment plan that will help and at the same time avoid any known triggers.

Medications like doxycycline and ox tetracycline that are antibiotics are commonly used for Acne Rosacea because they are thought to help reduce the lesions through their anti-inflammatory abilities. 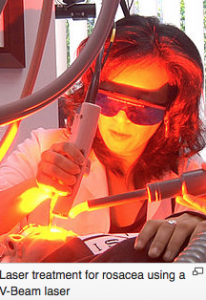 The use of Lasers is also being used in the treatment of Rosacea, it is said that with a number of treatments the redness may be eliminated.

With the dermatological vascular laser they use light to penetrate and target the capillaries in the dermis layer of the skin, the light heats up the walls of the capillaries, which damages them and causes the body to absorb them.

CO lasers is another laser, this one is used to remove the excess tissue from phymatous rosacea. The laser beam vaporizes the tissue.

Some of the differences between Acne and Rosacea are:

Rosacea – commonly the cheeks and nose sometimes the chin and forehead

Acne  – Mainly the face but back, chest and shoulders sometimes to a lesser degree

You many see bumps and pimples as the inflammation increases, and the eyes could feel gritty or appear bloodshot.

In advanced cases the nose may become swollen.

Acne – is more characterized by a great variety of lesions, with blackheads often more predominant.

Pimples, bumps and nodules may develop on the face and other affected areas of the body. The skin often becomes oily because the sebaceous glands are overactive.

This entry was posted in Skin Care. Bookmark the permalink.