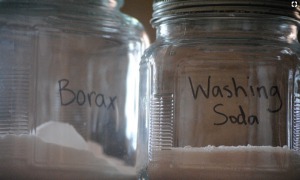 Making your own laundry soap can save you a lot of money, but not only that you know what goes into the product that will wash your clothing, bedding, etc.

There are some very harmful chemicals in some products on the market today and washing your cloths with them and then wearing those cloths puts those chemicals close to your body.

I suffered terribly from excema for years and that was one of the reason I started making soap, but that’s not where it stopped. I began to make laundry soap as well and we grow as much of our own food as we can – that’s another subject.

In the years since being proactive with my skin problems and using and making natural products. I have not had an excema outbreak in a very long time. not had an outbreak of excema in a long time.

The laundry soap recipe I use is powder:

Mix all these ingredients up and store in glass or plastic containers.

If you don’t make your own soap, you can find natural soaps at your local Farmer’s market or Health Food Store

Washing Soda and Borax can be found at the local grocery store in the laundry section of the store.

Borax was discovered in Tibet in dry lake beds, it was imported to the Arabian Peninsula in the 8th Century AD. In the 19th Century is become common use when the Pacific Coast Bora Company began to market it under the name “20 Mule Team Borax trademark.” It was named this because the borax was originally hauled out of the California and Nevada deserts by Mule Team.

Washing Soda is also known as Soda Ash, natural deposits of soda ash were found in 1938 in Green River Wyoming, but a huge reserve that has produced two million tons is located in Turkey.

Soda Ash acts as a water softener and remove stains such as grease, oil and wine.

If you want to make liquid laundry soap here is a recipe In the years since being proactive with my skin problems and using and making natural products.  I use a 5 gallon bucket (Some of my soap oils come in 5 gallon buckets so many)

To dissolve the grated soap – put the soap in a pan and add a couple quarts of water and heat while stirring constantly until the soap is totally dissolved.

In the 5 gallon bucket – pour about 4 gallons of water in and add the Borax and Washing Soda – stirring to dissolve the powders.

Once the powders are dissolved add the soap water and stir really well.

Cover your mixture and leave for a day or so, after that stir the mixture up real good and pour into jugs or containers. (I leave mine in the 5 gallon pail and take my soap out of it, but if you don’t have room you may want to store the extra away.

I use about 3/4 cups for an average load of laundry. I would suggest probably about 1/2 cup for a smaller load and 1 cup for a large or real dirty load.

These recipes are a great way to save money. In the years since being proactive with my skin problems and using and making natural products. I have not had an excema outbreak in a very long time. not calculated it out, but I’m sure it is just pennies per load.

If you want Natural Laundry Detergent, but don’t want to make it here is a great one to buy

This entry was posted in Recipes. Bookmark the permalink.