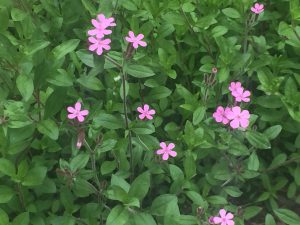 The soapwort in my rock garden is starting to flower.  This is one of my favorite flowers, not only is it beautiful and flowers from June to September, but it has many uses.

Soapwort (Saponaria) has been know for thousands of years for its ability to produce a soap like lather when crushed in water.

History of the name

Soapw0rt was also known as Bouncingbets and is said to have gotten it’s name “Bouncing Bet from barmaids in England who were often called Bets, these barmaids would use soapwart to clean the ale bottles.  To clean them they would put a sprig of the plant into the bottles, fill them with water and then shake the bottle.  When they began shaking the bottles the Bets began bouncing and that is where the term ‘Bouncing Bets’ began.

Where does Soapwort come from

Soapwort arrived in England around the Middle Ages, where monks had brought it from Germany and France, the common people realized its value immediately, but once the wealthy textile businessmen realized it’s value they cultivated fields of it as it was a very inexpensive detergent.


Fine silks and woollens were cleansed with the leaves and young roots.  This was made by bruising the stems and leaves in water.  It is the cylindrical roots that were used for medicine.

Like the dandelion and many other weeds, bouncing betty was brought over to the new land from Europe.  It became part of most pioneer gardens and it thrived in the new country.

Still today this weed is used in homes and museums to clean wall hangings and tapestries.

The Dutch in Pennsylvania used this herb to produce the foamy head on their beer, and still today, some brewers use the plant’s saponins to produce and maintain a foamy head to their beer.

This recipe can be used as a body wash or shampoo

I grow my own soapwort, which like I said is so pretty and really a very easy herb to grow so making my own soap is easy.  Soapwort also spreads very well and very rapidly so don’t worry if you use most of what you have grown.  It will pop up all over next year.

To make your soap you’ll need

Soapwort was also used for medicines to treat ailments such as coughs, and kidney stones.  In the Medieval times a herbalist would use this herb to treat syphilis, gonorrhea, leprosy and skin itches.

The Soapwort root would be dug up, cleaned and dried; it is noted that as late as the 1940s these roots were still being sold by the pound for medicine.

This entry was posted in Making Soaps, Miscellaneous, Uncategorized. Bookmark the permalink.